Health Net Points Out the Health Benefits of Vacations 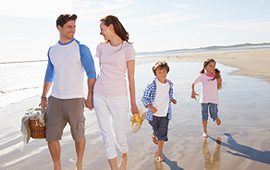 With summer now in full swing, Health Net, is working to increase awareness that taking a vacation not only can be fun, but it also can help bring a variety of health benefits.

While it might be assumed that Americans happily take time off, the reality – according to Glassdoor’s Q1 2014 Employment Confidence Survey – is that the average U.S. employee only takes half of his or her eligible vacation time.

“That’s a shame,” said Steve Blake, vice president of Clinical Operations at Managed Health Network, Inc., a subsidiary of Health Net, “because a number of studies have shown that taking time away from the job can have physical and psychological health benefits.”

“Workers who don’t take advantage of the vacation time that they’re eligible for could be shortchanging themselves in terms of benefits to their health,” added Blake.

Downtime May Decrease Heart Disease
A host of studies have highlighted the potential cardiovascular-health benefits of taking a vacation, including:

Other Upsides of Downtime
In addition to reducing the risk of heart disease, studies have shed light on several other potential health benefits associated with vacationing, including:

“Many of these studies point to the importance of achieving balance in life,” said Blake. “At MHN, for example, we offer a series of work-life seminars to help manage stress and enhance wellness by striking a balance between meeting daily responsibilities and challenges, while also weaving in relaxation.”

Medical Advice Disclaimer
The information provided is not intended as medical advice or as a substitute for professional medical care. Always seek the advice of your physician or other health provider for any questions you may have regarding your medical condition and follow your health care provider’s instructions.